When Telford DARS were doing the 50MHz Trophy contest down at Bridgnorth, I took the necessary bits along to try out this antenna. For simplicity, I set it up as an inverted-vee configuration. The reason was simple – you only need one support to hold it up, not two. I also had the club’s MFJ Antenna Analyser with me so that I could see what was happening. I recorded the data – see below.

Incidentally, all centre fed antennas can be supported by just one mast, with the ends left to droop down. The ‘rule of thumb’ is that the angle at the apex should never be less than 90 deg, otherwise cancellation between the two halves occurs. Furthermore, as it is the current peaks along an antenna that do most of the radiation, having the centre at the highest point is a positive advantage, rather than supported at each end with a big droop at the centre (current point nearest to ground). This is another reason for not being too fussy about the ends of a centre-fed antenna being lower, or bent around. It will have minimal effect on radiation efficiency. The only thing is never have the ends dropping right down to ground level – because the ground will seriously de-tune the antenna and it will not work – believe me, I’ve tried it. Just a yard or so off the deck makes all the difference. Simply have end insulators (or plastic strips etc), then wire or twine to the tying-off points. This effectively raises the ends of the antenna sufficiently clear of the ground. So, the ‘BKW can be horizontal (two supports) or inverted-vee layout (single support), as shown. Incidentally, the same applies to a simple dipole.

The antenna wire can be solid copper, stranded, insulated or not. A lot of rubbish is printed about the merits or otherwise of different sorts of wire. It’s largely hogwash. Wire is wire at these frequencies. Wet string? well that’s a different matter. 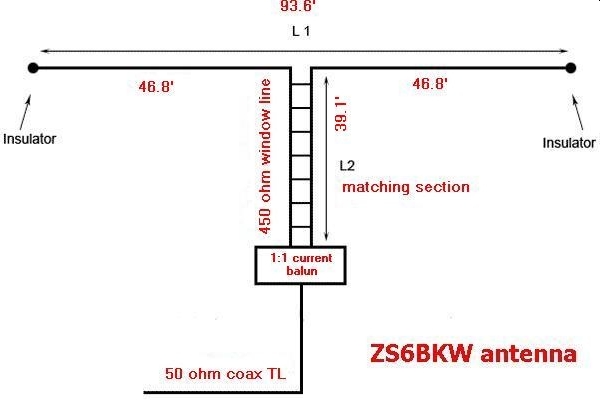 In the original design, 300 ohm twin was used, but I prefer the 450 ohm stuff. It’s much stronger and losses, especially in wet weather, are lower when impedances are high down the line. Back in 1985, 450 twin wasn’t readily available, there was only 75 and 300 twin, or the option of making your own open-wire feeders (which actually are the best of all – around 600 ohm, but these do tend to twist or get caught in trees etc! Yes – bitter experience and soldered joints here too!)

Finally, if you want to use it on other HF bands (3.5, 10, 21 MHz), an ATU (just like at the bottom of your ‘5RV!) will do the business, but preferably at the bottom of the 450 ohm feeder with a balanced output, not after a length of 50 ohm coax, if you’ve had to use it to reach your rig. Of course for 1.8 MHz (160m), you could short out the feeder twin, and feed it like a Marconi antenna, with a suitable ATU. Not very clever, however.

Here are the MFJ figures I recorded on the test antenna:-

Just to show the “proof in the pudding”, I used it on 7 and 14 MHz, and got excellent reports, as one would expect with a half-decent antenna! Didn’t have time to use it on all bands, but I leave that to you (to tell everyone how good it is).

Kevin VK2FUO advises to put a 1 to 1 current balun on the ZS6BKW antenna 450 ohm feeder line where it joins the 50 ohm coax to the radio.

Home brew, How to, Technical